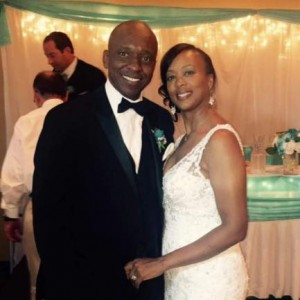 Norbert Elliott is pictured with his wife Angela Goodman Elliott, who is also an Assistant Coach for Sprints, Hurdles and Relays as well as Recruiting Coordinator at Purdue. They were married in South Bend, Indiana, last July

WASHINGTON, D.C. — Against almost unsurmountable odds, Bahamians have attained tremendous individual success in various areas of sports, as demonstrated by the accomplishments of such sporting icons as the late Andre Rodgers in baseball, Mychal Thompson in basketball, and Elijah Obed in boxing.

Although The Bahamas is a small country in terms of size and population, however, it is one of the world’s major super powers in the sporting genre of track and field, thanks to the emergence over the years of some very gifted and talented athletes who have occasionally out-performed the very best track and field stars from the world’s major military, economic and political super powers.

There’s no disputing the fact that the foundation for The Bahamas’ ascendancy to the level of one of the world’s top producers of track and field talent was laid by the late Tommy Robinson, who represented the Bahamas in four consecutive Summer Olympics, starting in 1956, and at the 1958 British Empire and Commonwealth Games in Cardiff, Wales, won gold in the 200-yard dash and silver in the 100-yard dash.

The world-at-large was served notice in 1999, however, by Debbie Ferguson, Chandra Sturrup, Sevatheda Fynes, Pauline Davis-Thompson and Eldece Clark that The Bahamas was on the cusp of becoming a sports super power. Collectively known as the Golden Girls, in that was the year they won the Gold Medal at the World Championships in Seville, Spain, in the 4 x 00 women’s relay and they  replicated that feat at the 2000 Olympics in Sydney, Australia.

But long before Tonique Williams-Darling confirmed The Bahamas’ status as a super power in track and field  by winning  a gold medal in the 400 meters at the 2004 Summer Olympics in Athens, Greece, various Bahamian track stars were, in a manner of speaking, “building blocks” for The Bahamas’ emergence as a track and field super power.

One such individual is Norbert Elliott, who since his stellar track and field career has enjoyed tremendous success as a track and field coach in the United States over the past 20 years and is currently Associate Head Coach for Men’s Sprints, Hurdles and Relays at Purdue University in Lafayette, Indiana.

Norbert was born and grew up in Nassau, but his family roots are in Stanyard Creek, Andros, where both of his parents, Audley Elliott and Edith Woodside Elliott, were born and grew up.

Norbert recalls that he first became interested in athletics as a young boy “watching my bigger brothers, Bruce and George, race other children through Brougham Street in Nassau.”

“As I got older I would trail behind, but soon they began to notice that I was not as far behind as I used to be when I was younger,” he says. “It was then that Bruce and George started encouraging me to race.  I had early success in elementary school at Our Lady’s, where I won the Catholic Elementary school 100 meters.”

In 1974 Nobert enrolled at Saint Augustine’s College in Nassau and was “discovered” by renowned high school coach Martin Lundy.

“Mr. Lundy coached me in basketball, volleyball and track and field,” Norbert says. “I had very good success throughout my high school career and was able to represent the Bahamas in my first CARIFTA Games in 1977 where I won a gold medal in the Triple Jump, an event that I accidentally stumbled upon after losing the 100 meters in a high school intramural race. I later defended that title when The Bahamas hosted the Games in 1978.”

When he graduated from Saint Augustine’s in 1980, Norbert says he had plans to attend Middle Tennessee University but  “I felt obligated to compete for my country when we hosted the Junior C.A.C. (Central America and Caribbean) Games.”

“I lost the athletic scholarship and ended up enrolling in Wharton County Junior College in Texas,” Norbert says. “I had a very stellar career during the year I spent there and was crowned the Junior College National Champion in 1981.  Later I enrolled at The University of Texas at El Paso (UTEP), where several other Bahamians, like Gerald Wisdom and Member of Parliament Leslie Miller, attended due to the recruitment of Steve Hanna, the then Bahamas Record holder in the Triple Jump.”

At the University of Texas his successful career continued. He was conference champion in the Triple Jump and was named a Two Time All American for UTEP.

In 1987, Norbert represented the Bahamas in Rome, Italy, at the World Track and Field Championships, where he finished 9th in the World.  The following year he was named to the 1988 Bahamas Olympic Team that participated in the Olympics held in Seoul, Korea, and finished 10thoverall in the Tripple Jump.

“The following year I got married to my college girlfriend Trudy Palacio, who hailed from Belize in Central America, and soon after we were expecting our first child,” Norbert recalls. “Neither of us were residents of the US so in order for me to remain in the US with my wife, who was working on a Master’s Degree in microbiology; I enrolled in graduate school to pursue a Master’s degree in education.  The funding for this was supported by me becoming a graduate assistant coach at UTEP under Coach Bob Kitchens. I soon realized that I had a God-given gift to coach.”

Norbert recalls that he was later given a full-time job under Coach Kitchens and remained with him for three years “until I got my big break to become the University of Georgia’s newest assistant coach.”

He and his wife Trudy had four more children — all boys – during his stay in Georgia.

“Tonique later transferred to South Carolina, but before that her and Debbie were instrumental in UGA winning its first SEC (Southeastern Conference) championship,” Norbert recalls. “Debbie went on to have a stellar college career at UGA by winning numerous NCAA titles and went on to achieve even greater accolades by winning World and Olympic gold medals for The Bahamas.

After 10 successful years as assistant coach at Georgia, Norbert went on to become head coach at Murray State University in Kentucky, but “due to budget cuts I left to become assistant coach at Tennessee, where we won numerous individual Southeastern titles, including a Team SEC Championship title in 2007.”

Then In 2009 “tragedy struck when I lost my wife Trudy to cancer.”

In 2012 Norbert joined up with fellow Bahamian Rolando Green at Purdue University in West Lafayette Indiana and “we currently have several very talented young Bahamian athletes, notably Bahamian record holder in the hurdles Devynne Charlton.  In just four years we have almost totally rewritten all the school records.”

At Purdue, it was almost inevitable that he would find “happiness again” by marrying his co-worker Angela Goodman, a former track star at Purdue.

Angela, who is also an Assistant Coach for Sprints, Hurdles and Relays as well a Recruiting Coordinator at Purdue, returned to her alma mater after head coaching jobs at the University of Connecticut, Michigan State University, Olivet College, Syracuse and Yale.

She and Norbert were married in South Bend, Indiana, last July.
Oswald T. Brown is Press, Cultural Affairs and Information Manager with the Bahamas Embassy in Washington, D.C. 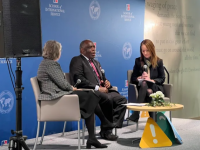 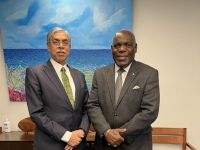 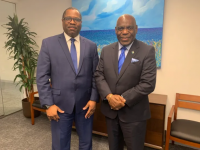 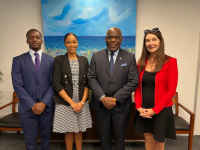 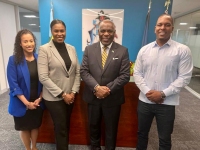 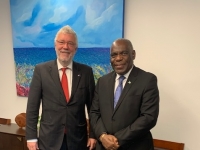