Washington DC — On Wednesday, 15th November, 2017, appointed Permanent Representative of The Bahamas to the Organization of American States(OAS), Mr. Sidney Collie, presented credentials accrediting him to the OAS to its Secretary General, H.E. Luis Almagro.

During his remarks Permanent Representative Collie acknowledged he was “humbled by the confidence reposed in [him] by the Prime Minister the Honourable Hubert A. Minnis and the Government of The Bahamas” and  reaffirmed “The Bahamas’ commitment to multilateralism and to active engagement with the OAS to bolster sustainable development, enhance citizen security, protect human rights and preserve democracy.”

In referencing the Bahamian national motto and the importance of hemispheric unity in approaching common challenges, Permanent Representative Collie stated that “The Bahamas sees a new role for a 21st century OAS as an advocate on behalf of Member States to help resolve emerging, real challenges, such as climate change, which threaten the ability of states to provide for the equitable, prosperous and safe societies which our citizens demand.”

OAS Secretary General Almagro noted that the skills and talents acquired from the considerable political activism and public administration background of Permanent Representative Collie would be an asset to the OAS and underscored the expectation that The Bahamas would continue to be a leader in the Organization.

The OAS is the world’s oldest regional organization and brings together all 35 independent states of the Americas and constitutes the main political, juridical, and social governmental forum in the Hemisphere. The Organization uses a four-pronged approach to effectively implement its essential purposes, based on its main pillars: democracy, human rights, security, and development. The Bahamas has been a member of the OAS since 1982. 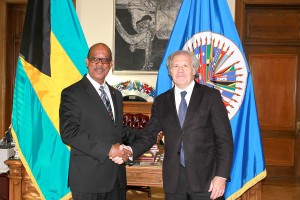 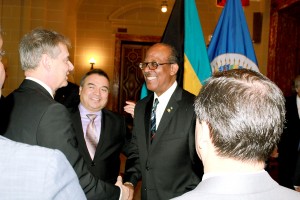