BAHAMIANS IN THE DIASPORA: CHRIS C. GARDINER
HAS ESTABLISHED A SUCCESSFUL CPA FIRM IN DC

WASHINGTON, D.C. — During the recent three-day visit to Washington, D.C., by Dr. Ranford Patterson, President of the Bahamas Christian Council (BCC), and a group of religious leaders from the BCC, Ms. Paulette Zonicle, Bahamas Consul General  to Washington, D.C., whose responsibilities include matters related to Bahamians in the Diaspora, knew exactly who to enlist to assist her in arranging for the Bahamian religious leaders to pay a courtesy call on the Rev. Donald Isaac, Director of Religious Affairs in the Executive Office of D.C. Mayor Muriel Bowser.

Ms. Zonicle placed a call to Mr. Chris C. Gardiner, who spent his boyhood years growing up in Grand Bahama and is currently the founder and president of GKA, P.C., a successful certified public accounting and consulting firm in the District of Columbia.

Over the years Mr. Gardiner has forged important ties in Washington’s business and political circles and he not only arranged the courtesy call on the Mayor’s Director of Religious Affairs but also accompanied the Bahamian religious leaders to the Executive Office of the Mayor on Wednesday, May 18, and hosted a luncheon for them at the Lauriol Plaza Restaurant in downtown Washington.

Mr. Gardiner was born in the Turks & Caicos Islands, but his family moved to Grand Bahama when he was five years old and he grew up in Pine Ridge and Freeport.

His late parents were Christopher and Louise Gardiner and his father was “for many years the produce manager at Winn Dixie” in Freeport.

“As a boy I attended school in Pine Ridge, where the principal was Mr. Hugh Campbell,” Mr. Gardiner recalls. “Although we moved to Freeport in 1958, I still attended school in Eight Mile Rock because at that time, there were no schools in Freeport for black children. The Port Authority bused us to Eight Mile Rock. I later attended Mary Star of the Sea when the Catholic Church opened the school and I was one of the first three students to graduate from Mary Star. The others were Kenny (Jude) Barr and Mary Burns. I then went to Queen’s College in Nassau, from where I graduated in 1964.”

After graduating from QC, Mr. Gardiner said he “worked briefly with Telecoms, under the supervision of Jackson Wilchcombe, Tourism Minister Obie Wilchcombe’s father, who got me the job as a favor to my parents. Thereafter, I went to work in the Commissioner’s Office, with Commissioner V. A. Knowles. After the 1967 elections, I went to work in the Public Treasury, under the leadership of former Ambassador Richard Demerette.”

After seven years with the Treasury, he worked briefly with the Grand Bahama Port Authority (GBPA) before joining Coopers & Lybrand in 1973.

“During my preparations for the ACCA exams, Coopers & Lybrand sent me to London for intensive studies at the London School of Accountancy,” Mr. Gardiner says. “I passed my final exams in 1978 and became a chartered accountant. I worked with C&L in Freeport and Toronto, Canada, for two years before transferring to their Dallas office in 1982. In 1984 I was transferred to C&L’s DC office to manage the audit of the DC Government.”

Mr. Gardiner says when he was asked to transfer to Coopers & Lybrand’s DC office, he told them that he wanted to start my own firm and they told him that if he agreed to the transfer, they would “give me some work to help my firm get started, provided I stayed at least two years and trained my successor.”

“I stayed with C&L for three more years, during which time I sat and passed the CPA exams,” Mr. Gardiner says. “I left in 1987 to start my firm, and C&L gave me a contract for $250K worth of work to help me get off the ground. I owe much to C&L. They trained me, educated me and helped me start my firm.”

Mr. Gardiner is the father of two sons — Michael, a CPA and a principal with his firm, and Kevin, an attorney with the DC Government – and he has one grandson, Christopher James. 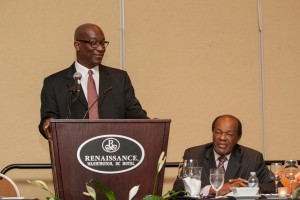 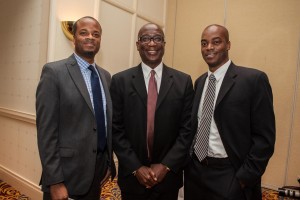 CAPTION TWO
Mr. Chris C. Gardiner (center) is flanked by his two sons, Michael Gardiner (right), a CPA and a principal in his firm, and Kevin Gardiner, an attorney with the DC Government. 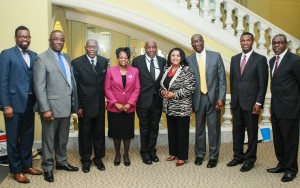 CAPTION THREE
Mr. Chris C. Gardiner, who has over the years have established important ties in Washington’s business and political communities, speaking at an appreciation dinner he organized and hosted for the late Mayor of the District of Columbia Marion Barry (right) the year before he died.