Mr. Kerry told the gathering that the world is in crisis and must begin implementing the decisions of COP 26 held in Scotland, adding that the crisis is one of mathematics and physics.

On January 20, 2021, John F. Kerry was sworn in as the United States’ Special Presidential Envoy for Climate and the first-ever Principal to sit on the National Security Council entirely dedicated to climate change.

According to a U.S. State Department release at the time, President Joe Biden announced that Kerry “would have a seat at every table around the world as he combats the climate crisis to meet the existential threat that we face.”

“In recent years, Kerry was the Carnegie Endowment for International Peace’s first ever Visiting Distinguished Statesman, following his four years as the 68th United States Secretary of State,” the release noted. “As America’s top diplomat, he guided the Department’s strategy on nuclear nonproliferation, combating radical extremism, and the threat of climate change. His tenure was marked by the successful negotiation of the Iran nuclear deal and the Paris Climate Agreement.”

The release added: “From 1985 to 2013, he served as a U.S. Senator representing Massachusetts, and was Chairman of the Senate Foreign Relations Committee from 2009 to 2013. Secretary Kerry served in the U.S. Navy, completing two combat tours of duty in Vietnam for which he received a Silver Star, a Bronze Star with Combat V, and three Purple Hearts. He received his undergraduate degree from Yale University and his law degree from Boston College Law School. 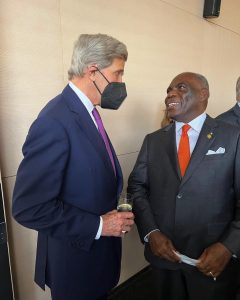