WASHINGTON, D.C., May 9, 2022 — His Excellency Wendall Jones, Bahamas Ambassador to the United States, received two honours in New Orleans, Louisiana, this past weekend.

The first came from members of the New Orleans City Council and the other from the Honourable Latoya Cantrell, Mayor of the City.

The Ambassador was invited to the New Orleans in an effort by officials there to deepen the relationship between The Bahamas and Louisiana, and the United States generally.

Mr. Jones, who spoke at a reception held in his honour, said the many introductions and interactions with New Orleanians, native Louisianans and members of Bahamian diaspora, proved to be beneficial and resourceful for the further growth and development of relations between the Bahamas and New Orleans. 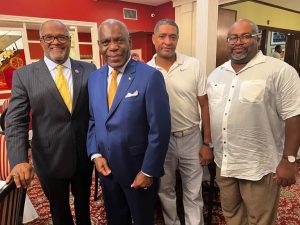