WASHINGTON, D.C., May 9, 2022 – On an official visit over the weekend to New Orleans, Louisiana, where he was honoured on two occasions, His Excellency Wendall Jones, Bahamas Ambassador to the United States, met with Superintendent Shaun Ferguson, head of the New Orleans Police Department (NOPD).

A 23-year veteran of the Police Force, Superintendent Ferguson was sworn-in as head of the NOPD in January 2019 after serving as the Commander of the Educational and Training Division, which oversees the police academy. Prior to overseeing the academy and training the next generation of NOPD officers, Ferguson served as Commander of the department’s Second District from 2016 to 2018 before moving to the academy in the summer of 2018.

Before his assignment in the Second District, Ferguson commanded NOPD’s Fourth District from 2014 to 2016.  The New Orleans native is a graduate of O. Perry Walker High School in 1990 and joined the NOPD in December 1998.

During his tenure, he obtained a Bachelor’s Degree in Business Administration from Southern University of New Orleans, where he also received a Master’s Degree in Criminal Justice.

Ferguson is also a member of the Major Cities Chiefs Association, the Louisiana Association of Chiefs of Police, and NOBLE (National Organization of Black Law Enforcement Executives).

Ambassador Jones was invited to New Orleans in an effort by officials there to deepen the relationship between The Bahamas and Louisiana.

Ambassador Jones was honoured by members of the New Orleans City Council and by the Hon. Latoya Cantrell, Mayor of the City. 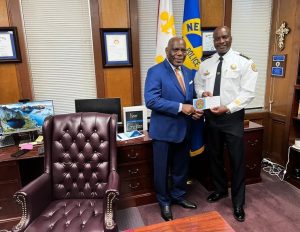